What is Bike Party?

In the latest article, we mentioned that our brand ambassador, Molly, joined the East Bay Bike Party held in Oakland. As an opportunity, Velodash decided to introduce some crazy and interesting facts about Bike party in the following series of articles.

When talking about parties, the first things that come to mind are always dancing, alcohol, and all kinds of carnivals. But, have you ever thought of a party that can be combined with hundreds of bicycles?

Bike party is not just a group of people riding bicycles together at night, but a large-scale fun activity combining light, sound, role-playing, and a grand gathering for riders to communicate with each other.

In the latest article, we mentioned that our brand ambassador, Molly, joined the East Bay Bike Party held in Oakland. As an opportunity, Velodash decided to introduce some crazy and interesting facts about Bike party in the following series of articles.

San Francisco has been a hub for cycling and has attracted many bike lovers to visit here to go on a ride. Therefore, various bicycle parties have also emerged. San Jose Bike Party in the Bay Area was established in 2007, it is the original “bike party“ now replicated in other cities around the world. Let us introduce more about it!

In 2007, a group of cyclists held the first San Jose Bike Party with the purpose of “Building community through cycling”. The party is free and has become a regular event held on the third Friday night of every month. After a simple ride, you can also gather to drink, dance, and have a TGIF carnival night.

Most of the bike parties in the Bay Area today are held following the San Jose Bike Party pattern. For example, the East Bay Bike Party is also a very well-known event in the East District of San Francisco.

The most unique feature of Bike Party is that it has different routes and dress code themes every month, such as “Where’s Wally”, Anime… etc. At the middle stop, you can see well-dressed riders interacting with each other. Everyone drinks and dances together, enjoying the amazing party!

The distance ranges from 15-30 miles. In addition to attracting more participants, shorter distances can also be managed easier, avoiding unexpectable accidents. We just have to admire the organizers for their well-planned management.

Even being held in the same area, the event route will be adjusted according to different months and themes, so that each ride will get a totally different experience!

Not only in the bay area, as the trend of cycling grows rapidly these years, similar events have also been hosted all over the world. Of course, Velodash doesn’t fall behind.

In addition to the riverside night ride which is regularly held every Tuesday, during Halloween in 2020, Velodash also came up with a trick-or-treat Halloween ride. A group of riders wearing wizard hats and cloaks shuttled through Taipei Riverside Park, adding a lot of fun to the ride!

After the event, we enjoyed the Halloween treats prepared by the organizers, giving this autumn holiday event a perfect end. Doesn’t it look similar to the Bike Party?

After watching so many wonderful Bike Party events, we believe that many riders are eager to join one too! When the pandemic slows down, Velodash is also ready to go. Get ready for a series of interesting cycling events and stay tuned by following our official fanpage and blog posts! 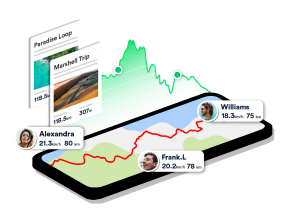